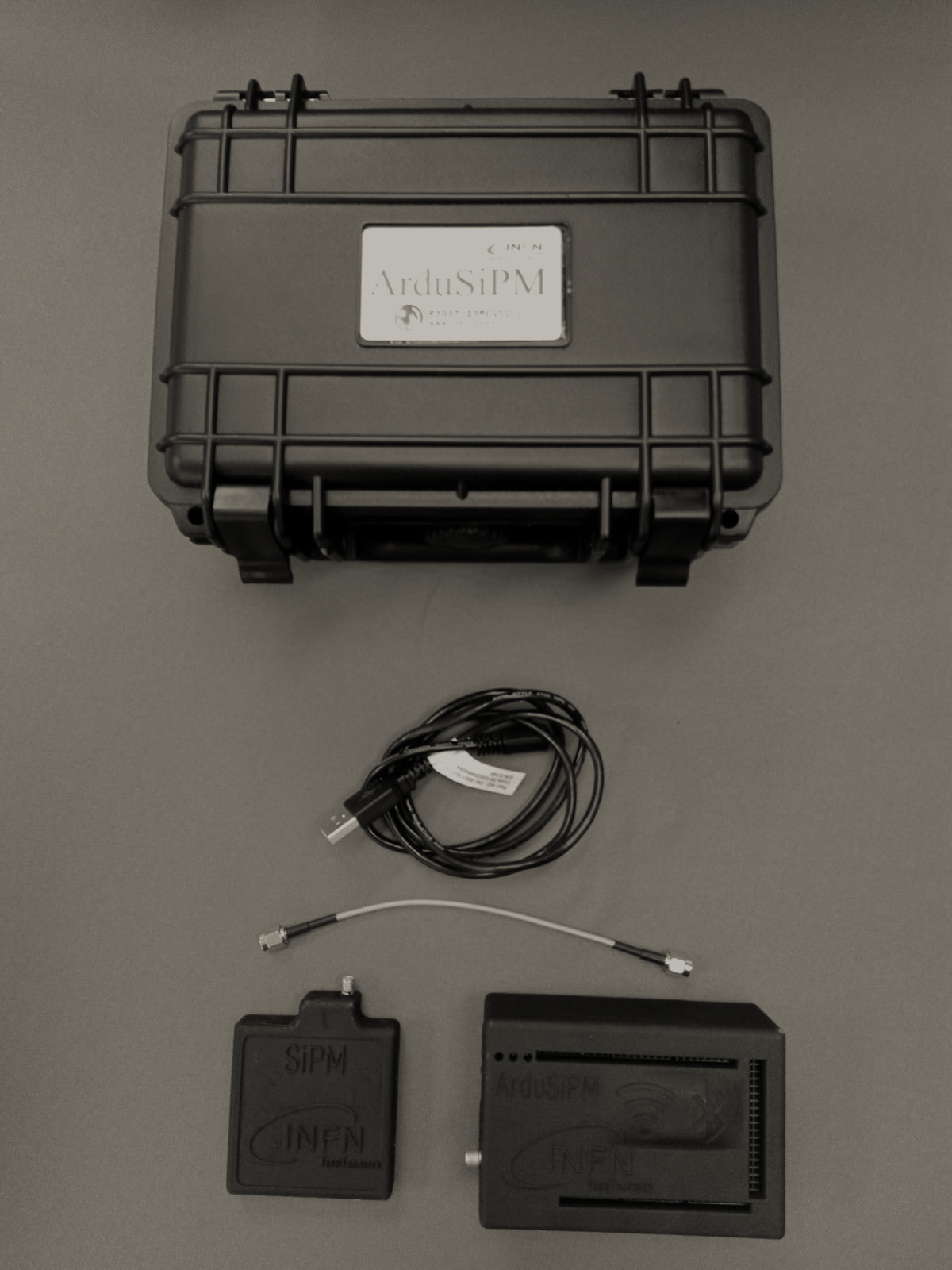 In this page you want to make available to users the freeware or public domain software, the articles, any new firmware versions but above all the users' experiences and the experiments carried out.

Robot Domestici Industries will try as far as possible to catalog all the hardware useful for the realization of the experiments.

We would like to introduce to you the ArduSiPM Solution – an easy hand-held battery operated device with an Arduino board, which is used to detect cosmic rays and nuclear radiation.

The ambit of data acquisition for particle detection is a field apparently limited to top scientists from CERN in Geneva and Fermilab in Chicago. Cosmic ray and radiation detection can be a great exploration for teachers, students and science enthusiasts, and ArduSiPM was created to make it accessible.

The ArduSiPm was designed by a group from National Institute of Nuclear Physics in Rome, led by Dr. Valerio Bocci, an expert in instrumentation for high energy physics. Their goal was to build a small detection system for beta ray detection and beam monitoring for the CERN accelerator, but also for testing SiPM technology. The team was sure about the educational and scientific potential of the project from the very beginning. Robot Domestici - a young Italian company became interested in the project and funded mass-production.

It is possible, using ArduSiPM, to reproduce some famous past experiments from Victor Hesse, Bruno Rossi, and Domenico Pacini, to name a few. By connecting to the cloud, we can understand how modern giant experiments like the Telescope Array in Utah or Auger in Argentina are searching the most energetic cosmic rays that come from the furthest in space. The ArduSiPM is the first all-in-one, low-cost radiation detector device which uses the principle of scintillation. Scintillation is a flash of light produced in some transparent material by the passage of a particle (an electron, an alpha particle, an ion, or a high-energy photon). The quantity of light emitted in this process is very poor and can be measured in terms of number of photons, a very small quantity undetectable with normal solid light detectors.

In the past, the necessity to use Photo Multipliers as a light detector (cumbersome vacuum phototubes, extremely sensitive detectors of light) limited the use of scintillator in radiation hand-held device, preferring the Geiger counter approach. The Silicon Photomultipliers (SiPMs) are very small and cheap, the SiPM solid photon detectors were born in the laboratory as a concept in 1996 but are now commercially available. They are usable to supersede in some applications with more expensive and difficult-to-use Photo Multipliers (PM). A SiPM can be coupled with a scintillator crystal to build an efficient, small and solid radiation detector.


This cost effective and easily replicable hardware and software solution uses Arduino DUE, based on an ARM Cortex-M3 microcontroller. The ArduSiPM is an easy battery operated hand-held device using the custom designed ArduSiPM Shield. The shield contains different electronic features both to monitor, to set, and to acquire the SiPM signals using the Arduino microcontroller. Embedded in the shield is an efficient design including a controlled bias voltage power supply, a fast voltage preamplifier, a programmable fast discriminator to generate an over-threshold digital pulse, a peak hold to measure the pulse height, a temperature monitor system, and a scaler to monitor the over-threshold rate and arrival time of the pulses. TCP/IP Wi-Fi or Ethernet connection is used both to control and to acquire the ArduSiPM remotely with PC software or a tablet app. The ArduSiPM has an adjustable supply voltage from 4.5 - 90 volts, temperature sensor, sensor for barometric pressure, LEDs and more.

The low cost of the radiation detector permits us to think of use cases with large data-sets. One could use ArduSiPM to detect or monitor a nuclear waste disposal site, or use it in a large sample area to acquire information about natural radiation or cosmic rays. Apart from the research environment, ArduSiPM is a great tool to explain the complete chain of measurements from the detection to the data acquisition to better understand electronics and sensors alongside this fascinating Silicon Photo Multiplier achievement.

A low cost network of spectrometer radiation detectors based on the ArduSiPM a compact transportable Software/Hardware Data Acquisition system with Arduino DUE. Advancements in Nuclear Instrumentation Measurement Methods and their Applications (Animma IEEE conference) Lisbon 2015